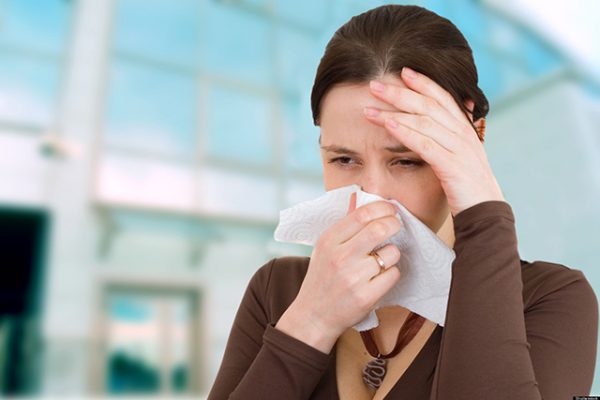 (Reprinted From “Nutrition and Healing”)

It’s not everyday you see nuns in full religious garb anymore, so when two walked into the Tahoma Clinic recently, they attracted a bit of attention from both the staff and patients. But that wasn’t what I remember most about their visit. Before they left the Clinic that day, the nuns taught me an approach to respiratory health I’d never even heard of before.

Like many monastic orders, these nuns support themselves and their convent by making and selling products. Their specialty is 100 percent beeswax candles, which, Mother Thecla told me, actually clean the air, helping to reduce the pollutant and allergen load.

Technology actually made candles worse for your health

She went on to explain that hundreds of years ago, most candles were made of beeswax. But over the centuries, beeswax candles were gradually replaced by tallow (animal fat) candles, and then in the last century by paraffin candles, which are probably the kind you have in your home right now. It sounds innocent enough, but paraffin is made from the sludge at the bottom of barrels of crude oil, which is then treated and bleached with benzene and other chemical solvents to “clean it up” for use in candles. Paraffin candles put out soot and smoke when you burn them (I thought all candles did that) along with toxins and carcinogens. Since burning petrochemical paraffin smells bad, synthetic fragrance oils are added, many of which are irritating and even toxic themselves when they’re burned. Breathing what paraffin candles give off has been compared to breathing diesel fumes.

And, to make matters worse, the soot, smoke, and chemical residue from “regular” candles can stick to walls, ceilings, and ventilation ducts and gets re-circulated whenever the heating/cooling system is in action, exposing you to these pollutants even when the paraffin candles aren’t burning.

Allergy, sinus, and asthma relief just from lighting a candle

But beeswax candles don’t cause any of those problems. In fact, Mother Thecla told me people with allergies, sinus problems, and asthma have reported significant improvement in their symptoms, breathing better and sleeping better after burning the 100 percent beeswax candles in their bedrooms for three to four hours before bedtime. One person who burned a beeswax candle all day when she was home reported that her asthma gradually went away completely.

After the nuns left, I did a bit of my own research to see if I could turn up any scientific evidence on bees-wax’s effects. Although scientists still don’t know all the intricacies of the complex molecules in beeswax, there’s at least a partial explanation for the healthful action of burning beeswax candles. According to entomologist Bill Reno, burning beeswax produces negative ions.1 Negative ions are nature’s air purifiers, cleaning the air of dust, mold, bacteria, viruses, and other pollutants.

Make sure you’re getting the real deal

Here’s the catch: to get any of these benefits, the candle has to be 100 percent beeswax. And, unfortunately, a candle only needs to contain 51 percent beeswax to be labeled as a beeswax candle. The rest can be paraffin (or anything else burnable), so it may not be as easy as picking one up the next time you’re at the mall.

One way to find out is to ask the store clerk to light the candle: 100 percent beeswax candles have a uniquely fresh smell–which is distinctly different from paraffin. (The nuns even showed us the difference, so I can vouch for the fact that it’s a noticeable one.)

Beeswax candles can be on the expensive side–at least in comparison to “regular” paraffin candles. But beeswax actually burns slower, so you’ll get more for your money than if you opted for the cheaper versions. Plus, the potential for better respiratory health is well worth the few extra cents.

There’s not much hard evidence on beeswax’s health benefits, but if it’s possible that something as simple as burning a candle might be able to help your respiratory problems, it’s at least worth a try.

Dr. Jonathan Wright is the Medical Director of  Tahoma Clinic in Seattle, WA where he also practices medicine. A Harvard University (A.B. 1965) and University of Michigan graduate (M.D. 1969), he continues to be a for-runner in research and application of natural treatments for healthy aging and illness. Along with Alan Gaby, M.D., he has since 1976 accumulated a file of over 50,000 research papers about diet, vitamins, minerals, botanicals, and other natural substances from which he has developed non-patent medicine (non-“drug”) treatments for health problems. Dr. Wright has taught natural biochemical medical treatments since 1983 to thousands of physicians in the USA, Europe, and Japan.

He was the first to develop and introduce the use of comprehensive patterns of bio-identical hormones (including estrogens, progesterone, DHEA and testosterone) in 1982 and (at Meridian Valley Laboratory) directed the development of tests to ensure their safe use. He teaches use and laboratory monitoring of bio-identical hormones at several seminars each year. He also originated successful natural treatment for elimination of childhood asthma, developed treatment to stop vision loss or improve vision in the majority of individuals with “dry” macular degeneration, was the first to use aldosterone to reverse age-related hearing loss, discovered the effect of iodine on estrogen metabolism and cobalt on steroid detoxification, popularized the use of D-mannose treatment for E. coli urinary tract infection, developed effective natural treatment for seborrheic dermatitis, allergic and viral conjunctivitis, and Osgood-Schlatter’s disease.

Dr. Wright founded the Tahoma Clinic (1973), Meridian Valley Laboratory (1976), and the Tahoma Clinic Foundation (1996). Tahoma Clinic was established to approach disease by natural means and emphasize correction of imbalances in the body that lead to disease. The infamous 1992 FDA Tahoma Clinic “raid” (“The Great B-Vitamin Bust”) was a major impetus for Congressional reform of vitamin/mineral regulation. Dr. Wright continues to be an advocate for patient freedom of choice in healthcare.

Internationally known for his books and medical articles, Dr. Wright has authored or co-authored 14 books, selling over 1.5 million copies with two texts achieving best-selling status; “Book of Nutritional Therapy” and “Guide to Healing with Nutrition”. Dr. Wright authors “Nutrition and Healing”, a monthly newsletter emphasizing nutritional medicine, that reaches over 118,000 in the USA and another 15,000 or more worldwide.